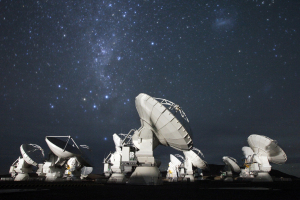 Being Part of the ALMA Radio Telescope

In 1998, I started at iSine (then Innotech Systems) working on layout, the CAD/CAM portion of integrated circuit design. The first full chip layout that I completed was a correlator for the Atacama Large Millimeter/submillimeter Array (ALMA) in Chile. The correlator chip receives signals from individual radio telescopes and uses algorithms to remove noise from the signals. This layout was done totally by hand (without using expensive routing software) using 0.25µm design rules. It used a repeated block, so it was not as difficult as one might think considering that it was a 2 million gate design with 240 pins and took about a year to complete the design. Although the chips were fabbed and packaged by 2002, the radio telescope array only started operation in 2011.

So what is ALMA and why did it take so long to get online?

ALMA is an astronomical interferometer of 66 radio telescopes high (5000m altitude) in the Atacama desert of Chile. 54 of the telescopes are 12 meters (39 ft) across and 12 are smaller at 7 meters (23 ft) across. (Seriously, that’s wider than my house!) ALMA cost around $1.4 billion, making it the most expensive ground-based telescope in operation. (By the way, that’s only 1/10 the cost of Boston’s Big Dig.) It was funded by a consortium of European, US, Canadian, and East Asian countries, with the cooperation of the Republic of Chile.

The radio antennas (which look like large satellite dishes) detect wavelengths between 0.3mm to 9.6mm (the boundary between infrared light and longer radio waves). Each antenna has a large reflecting surface, the dish, which is accurate to within 25 mm. It is smooth, but not mirrored (not needed for the longer wavelengths). They can be steered very precisely and pointed to an accuracy of 1/6000 of a degree. The antennas (each weighing over 100 tons) can also be moved over distances of 150m to 16km, to create a variable ‘zoom’ with the array.

Why is there an array of telescopes rather than one big one?

Because ALMA is observing wavelengths in the millimeter range, a dish would need to be several kilometers wide to get the resolution seen by optical systems. Since this is physically impossible, many individual antennas are spread out over a large area and work together as an interferometer. Moving the antennas apart increases the resolution. The signals from the individual antennas are brought to the operations building where they are processed by the ALMA correlator, a specialized supercomputer. The resulting processed image looks like it came from a single telescope. When the telescopes are the furthest apart, the resolution of the ALMA telescope is better than the Hubble Space Telescope!

How does the correlator chip work?

The ALMA signal processing flow is described here. Each board has 64 correlator chips. There are 1024 boards used in the facility. Analog signals received by the antennas are converted to a stream of digital data samples. These digital samples are passed to the correlator cards. The correlator is arranged as a giant array of small processors, with the data samples flowing through the array horizontally and vertically.  Here’s a cool video (made by the European Southern Observatory) about the correlator.

Each chip in a correlator card accepts data from eight antennas in the x direction and eight in the y direction. Within the chip is a 4×4 array of 256 lag clusters. A “lag” is the heart of the correlator function. It contains a math function which multiplies the two incoming data samples (from the current x and delayed y samples, for example), an add/accumulate function to aggregate the results of all the multiplications, and a register stage to add a one tick delay before passing a delayed sample to the adjacent lag block. This way, each cluster compares the current sample from one antenna against the time delayed sample from another antenna.

iSine designed an improved correlator chip for the Dominion Radio Astrophysical Observatory (VLA Radio Telescope in New Mexico) in 2005.  The WIDAR correlator chip has 672 pins and 4 million gates and used 0.13µm semiconductor technology.  It uses iSine’s ACCEL™ Power Regulator to optimize the speed-power operating point so that each individual chip can be slowed down or sped up by decreasing or increasing the voltage supplied to it. This also improves the lifespan of the correlator chips, which is greater than 20 years in a harsh environment.

NRAO is currently in the process of developing the next generation correlator chip. 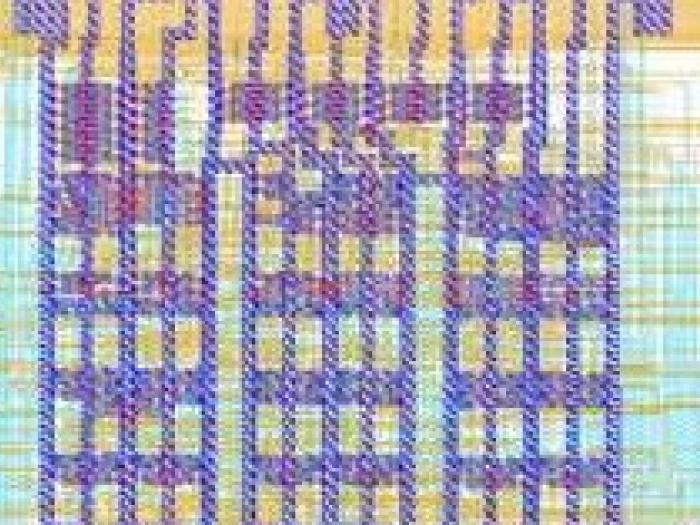